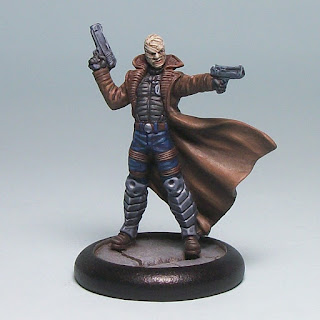 Hush is a mini I liked the look of straight-away, and was eager to paint. I have read Batman stories on and off for over 35 years, but have not read any Hush tales, but I understand the background to the character (childhood friend of Bruce Wayne turned bad - so a mirror to Batman in some ways) - and I really like his visual.

I painted Hush over a few sessions in a couple of days, and as the hairy-sticking progressed well, I was glad to see him through. A while ago, I planned and stated that after painting Prisoner 01, I would likely finish off Ozymandias and maybe add Hush. In the mean-time I painted File No. 08923, and now that Hush is finished, I may rethink how long a lay-off of BMG stuff I have - not least because some of them have felt fairly quick (by my standards) to paint. Hush rounds out my Poison Ivy crew options for now. My Black Mask crew is almost where I want it and maybe needs either Catwoman or Mr. Freeze purely for Loot grabs. That leaves the option of finishing off the Watchmen, and I admit if Court of Owls gets to 350 Reputation, they will likely jump to near the top of the painting queue. 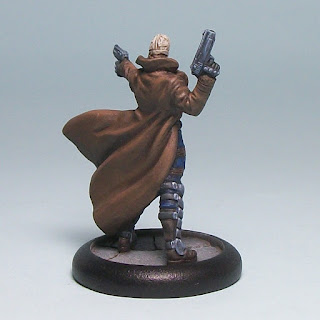 By the standards of some Knight Models minis, Hush was easy to put together which was nice. It was also nice to get the mini painted pretty quickly, especially to maintain some impetus after a productive July. The painting was pretty painless all told which was very pleasant, and may cause me to carry on adding some more BMG each month while I continue to have momentum with the range, if only because of the dent it makes in the 'lead mountain'!

Hush is primarily intended to go with my Poison Ivy crew, offering a combination of threat and 'game management': the latter aspect through his Mastermind, Persuasive and Scheming Traits.

Hush can only go with a few crews, and not Black Mask which disappoints me. One of the crews he can join is Joker: the thought of Joker, Riddler and Hush removing 1 opposing Take the Lead counter and adding 2 for their crew seems an intriguing strategy - for a 6 Round game that would give 5 counters to Joker and 2 to the opponent, meaning Joker will win 4 or 5 initiative draws. Add the Early Bird or Perfect Plan Strategies, and if  not countered, it is entirely possible that your opponent may not win the Take The Lead draw at all.