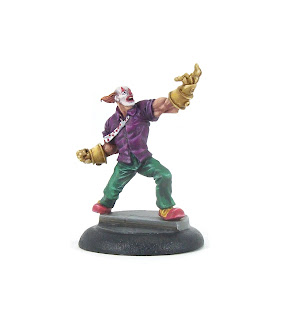 Punchline is one of the the Villains for my upcoming Kitbash Games Supers Unlimited launch (January 2019 - stay tuned!), and a sculpt I love.

Punchline was a kids' clown/entertainer whose life was falling apart when he happened upon a pair of super-science gloves in an abandoned secret lair. From that moment on he decided the world would be his punch-bag, not the other way around. 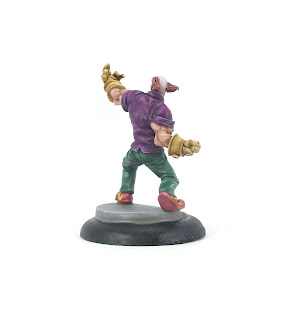 I originally conceived the character around ten years ago, and other than the re-design of his gloves (the originals were very baroque), not a great deal changed when I had more up to date art crafted for him - the core elements all remained the same (clown, power gloved, colour scheme). However, I decided I wasn't brave enough to try the yellow pin-stripes as shown on his updated trousers!