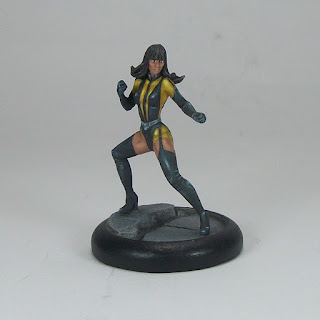 Silk Spectre II is done, and being finished means another Watchman painted! That puts me one mini (Comedian) short of the full crew of five, and will hopefully lead to another playable painted BMG crew for me early next year. That said, Silk Spectre has been a very long gestating paint-job....

I have been painting the Watchmen on and off (mainly off....) for almost two and half years now, so getting them cleared will be long overdue. The irony is that I suspect they have fallen behind the pack as the BMG game overall has progressed, so I guess they will be challenging to use. If they become my main crew for next year I reckon I will face a lot of losses along the way - although I am vacillating between Watchmen, Joker, Mr. Freeze and a weird-ish Organized Crime list. 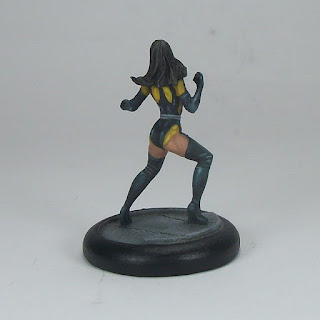 In game terms Silk Spectre seems a cheap defensively-focused character (she has high Defense, Acrobat providing Dodge, Martial Artist and Counterattack), and although she puts out a lot of Attacks, that won't lead to a lot of Damage so she may even struggle taking out some Henchmen, Essentially I see her sitting on an Objective (preferably Ammo or Titan for the Ping rolls).

Thematically, taking a Watchmen crew to tournaments could be cool as they are not often seen, but I am a gamer at heart, and I don't know if I will be able to get the best out of them and face another steep learning curve after the Court of Owls at tournaments, so time will tell how much they get used when finally done. Meanwhile, I have made a start on the Comedian, maybe I can finish one more mini this year....