This is far from brilliant, but it is done, which for me is the main thing given the vast numbers of unpainted minis I own!

I struggled a bit with this, partly down to my poor prep as it was a pain to clean up, and then I just rushed putting it together. I will say that as nice as the sculpts are, some of the part fits are poor and some of the casting has been aggravating. Still, I should have been more diligent, so only myself to blame for not being so.

Eagle eyed readers may noted I have not painted the hair tie; that will be rectified as soon as possible now I have noticed!

Over on Rob's blog, he has stayed the course despite technical difficulties that have made blogging awkward. We are 75% done and both on course. In time we should be able to get some gaming done with these which would be nice. 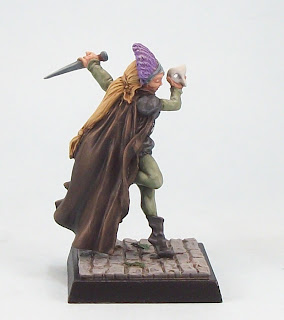 The Harlequin adds some minor variation to the overall colour palette I have been using with the Brotherhood, but I hope she will still look like she fits appropriately among the rest of them. Still, I felt I was rushing this (and to be honest I was), but that is part of the Challenge. I am also trying a new way of doing eyes since that has been annoying me recently, so not ideal, but I think I know how I will be doing them going forwards.

In terms of the Brotherhood as a Crew, the Harlequin like the Coscritti is a Deckhand. Each Deckhand allows up to 2 Specialists to join the Crew (such as Apagado), so I will look at Specialists when I eventually bolster the ranks. Between the 2 Deckhands the Harlequin looks more formidable in terms of cost in Doubloons, but until I get some games in I cannot comment with any semblance of insight.

The next mini for the Challenge is the Leader - the Master Assassin. I am still putting that together, so there is nothing quite like pressure, eh? 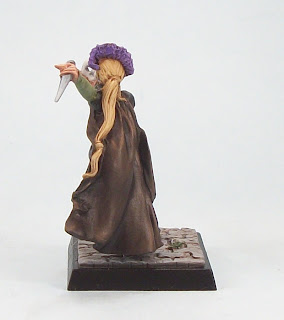 Will I succeed? Stay tuned!