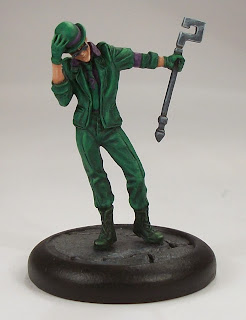 The Riddler is my first finished mini for the Batman Miniatures game/DC Comics range of models from Knight Models.

As soon as I saw the first mini in the line (Batman, naturally) I was impressed, and when  I learned of the range I was in. I don't play the Arkham series of video games which much of the imagery and character design for this range is drawn, but I do like the minis range. A lot. So much so I can see myself collecting the loot given a chance. They have already begun to diversify the line to include DC Comics characters from outside the games (Deathstroke; Green Arrow), Watchmen characters, and other DC movie characters (some Dark Knight characters; Superman as seen in the Man of Steel), so it is an increasingly eclectic mix.

I don't know that I will ever actually play the game to be honest. The current English translation is in need of a lot of work I feel, although it clearly has a strong following among fans of the rules, and I have a much more established preference when it comes to super-powered gaming! But the minis are mostly great, although the metal is super-soft which is less than pleasing, and at least one mini (DKR Bane) is clearly out of the established scale, but they are tolerable issues. 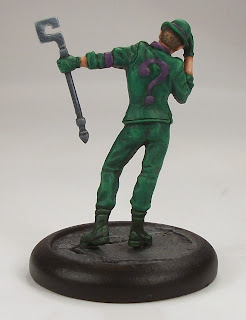 The sculpting is exquisite in my humble opinion. Ultimately I struggled with this, simply because some parts to paint were so finely detailed. That said, I am fairly happy with the final result all told, and I will continue to add to my collection of the minis. I just expect to paint them occasionally, focusing more on other ranges I am more likely to game with right now (Pulp City; Anima Tactics; MERCS; and Freebooters Fate). Still, maybe another will be painted up before too long, just watch this space....
Posted by pulpcitizen at 11:10