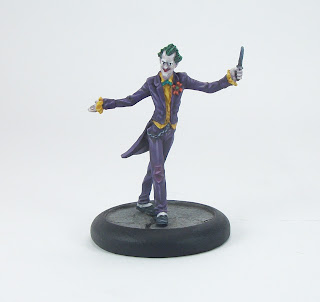 Joker was started many months ago (early September 2016), with a view to building up a new crew to be able to play with. I got side-tracked (as usual) so that hasn't really materialised - I certainly have a playable Joker crew, but not necessarily one I would choose to play if that makes sense?

As the mini had been part-painted for some time, it was recently finishing Prisoner 05 that motivated me to want to clear this one too. This Joker is my 60th painted BMG mini, and I hope to clear some other part-done minis from the range in the next few weeks. 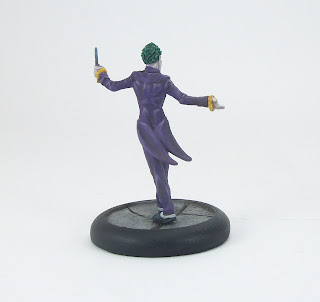 Arkham City Joker recently saw a cost increase via FAQ/Errata which I think has been long overdue, simply because he bends four major areas of rules (initiative and game length; counter allocation for his Henchmen; being able to shoot around corners; a universal re-roll via Luck). I have faced Arkham City Joker crews a few times and it has always been the fact he bends so many areas of rules which I found frustrating to play against, so I am more than content with the cost adjustment even if I end up fielding this version of Joker myself.