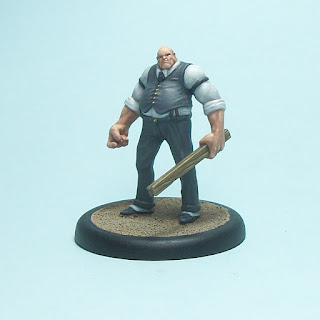 Mr. Graves is my first painted Malifaux mini, having sat ready for painting for a good few months, maybe even a year. Don't worry though, I am not launching into a huge new project!

I picked up some Malifaux minis a year or so ago, as an option if I ever got to attend a local gaming club since I understand it is one of the games they play there; unfortunately that hasn't happened so far. Well, I decided I needed a change of pace on the painting front and so started this and another Malifaux mini recently, blocking out basic colours a week or two ago. The past week, however, has been my first in a new job and that has left me mentally tired and not up to painting during the evenings, so I didn't get around to finishing Mr. Graves until the weekend arrived (once I had some other work out of the way); unfortunetly the highlights are pretty washed out in the pictures, especially on the grey clothing. With the new job that has meant a slow start to painting this month, but I hope to catch up soon. 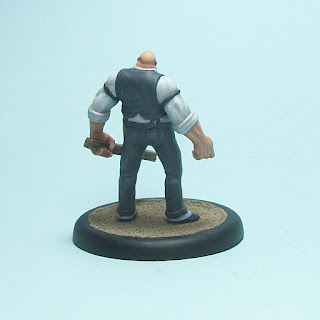 I was interested when I learned Wyrd were doing plastics, and was impressed with the first couple I assembled. I don't enjoy assembling metal minis, so this was a nice change. The sculpting style has a slightly exaggerated aesthetic which took a little getting used to as I was painting the mini.

I have some more Malifaux minis to assemble and/or paint (enough to manage a crew of up to 50 or so Soulstones I think), so may tackle a few more in the next few months.

Mr. Graves is dual-faction in the game, and can be fielded in Ten Thunders or Neverborn crews. Other than that, I know nothing about how he plays. I only have the small 'rules-only' Malifaux 2e rulebook, so don't know about his background either unfortunately, but I take it he is some kind of bouncer. A big one at that (he is on a 40 mm base!). Hopefully he gets some company before too long when the fancy takes me to do some more.
Posted by pulpcitizen at 12:33