These Shadow Beasts are part of a private commission from which I was really fortunate enough to be able to get copies, and I am very glad that I did. They were nice and simple to paint, just the kind of welcome diversion from my recent painting block. They also mean that I can tick off a couple more minis for my MotU Project. 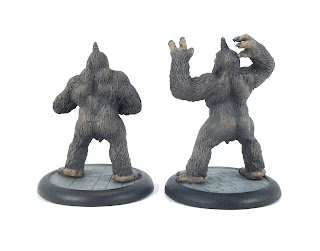 The Shadow Beasts were featured in the original He-Man and the Masters of the Universe cartoon, as well the 2002 cartoon of the same name. They are large ape-like beasts living throughout the dark hemisphere. With their great strength and stealthy appearance, Shadow Beasts are described as more than a match for most heroic warriors.

The painting was done in a few hours, but broken into smaller chunks of time, so in reality maybe 2 to 3 hours in total. They were mainly dry-brushed with some washes here and there, and highlights added to hands and feet. It was nice to have a couple of minis done so quickly. the colour scheme was mainly influenced by the Masters of the Universe Classics version action figure from recent years. 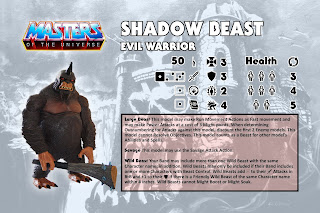 I had originally intended to use Shadow Beasts and other creatures as 'wandering monster' types in MotU games, but subsequently decided that they would be best used as an option to be used alongside Beast Man so I adjusted my plans for them accordingly. Now they can only used if Beast Man (or another Beast Controller character) is in the same Band, which feels right to me.
Posted by pulpcitizen at 02:53