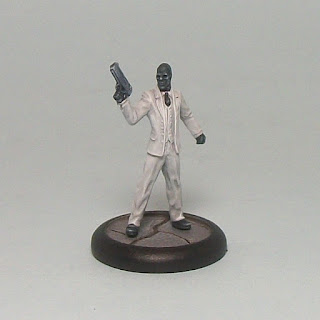 Black Mask is my third BMG Leader, opening up a second crew option for me. Poison Ivy has too many downsides at present for me to try to get to grips with (immobile Henchmen unable to score Objective VP's, and that are vulnerable to becoming one-shot Casualties with the right Special Attack; other Henchmen cannot benefit from equipment upgrades; a tricksy Leader used with less-than-effective Henchmen), so I settled on painting up a Black Mask crew, supplemented by Riddler, Deadshot, and some Blackgate Prisoners.

Now my evaluation of Poison Ivy may be harsh, but for now, she is not for me. So I am hoping Black Mask better fits my approach to games, and has fewer in-built Henchmen limitations to overcome. 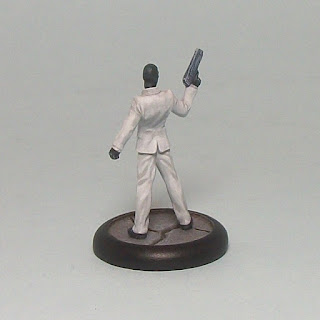 Tackling Black Mask was surprisingly quick by my standards. I knew from the outset that I was not going to try pin-stripes - too fiddly for me. I wanted a simple white suit with some dark contrasts, kind of influenced by Archangel from 80's action TV show Airwolf. I only started Black Mask after commencing work on a couple of other minis, but pretty quickly I had the bulk of him done, and I am happy with the final look. Simple but satisfying.

Moving forward I ideally have another four minis to finish. One is finished (posting him tomorrow), and two are part-painted. I am hoping to give the crew a run-out in mid-June to try and get some practice in before my second BMG tournament at Titan Games. The pressure is on!