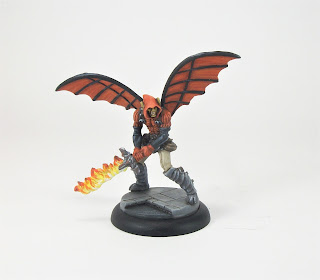 Goblin Knight is my first painted mini in a couple of months, due to a lot of real-life stuff - at times like those I usually can write some stuff (hence the Supers Unlimited progress), but painting tends to take a hit. Thankfully I have cleared this mini which was started a while back, and I may try and tackle some easier to paint generic stuff soon to get myself back on track.

I really didn't enjoy painting this in anyway to be honest - the sculpt felt fiddly in terms of design, and the casting was poor in places, not uncommon with too many Knight Models in my experience. It does mean another SMG mini done, a range I expected to become defunct and since I commented about that it has come to pass. Brummie and me are planning a 400 Rep BMG versus SMG game sometime soon, so that will be a positive out of getting this mini painted amid the ongoing stuff related to the collapse of Knight's Marvel ranges. 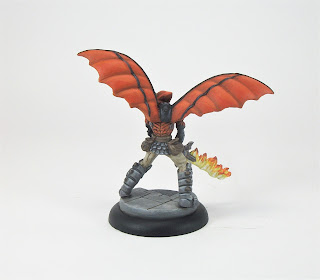 In terms of my painting progress for SMG I am adding Venom and Elektra to the overall target list since I consider them part of the range; both had cards published digitally if not physically. I have since had my own copies printed for eventual gaming. Venom will give another Goblin Cult option for a bit of variety when I eventually get round to painting the mini.