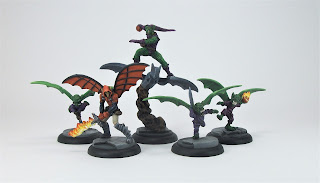 The Goblin Cult is the first SMG crew I have finished, and one of only two that were fleshed out at all. In early 2016 Knight Models proclaimed 'coming soon' for SHIELD and HYDRA, however neither materialised. In addition, the Elektra card which materialised had her Affiliated with The Hand (Marvel ninja clan), and gave her Affinity to Kingpin suggesting plans were considered for at least 6 Factions during early development. Which makes the failure to adequately support or promote SMG by Knight all the more disappointing, as I think that could have led to some very cool characters being released.

With that polemic out of the way, on to the Goblin Cult! So what do we have? Well for one I have yet to play SMG, so my thoughts are all theories. SMG is basically an extra 'skin' of rules for BMG, but there are a few noticeable design features.

The first thing that sticks out is that crews are really geared to 400 Rep rather than the tournament standard of 350 for BMG. I say this simply because Goblin Cult can assemble a 340 Rep crew (with or without Venom), but not one at 350. The next thing is that the Spider-types (the two Spider-man options and Venom) have a suite of Traits bundled under a single label (Arachnid), and similarly the Goblin-types (Green Goblin and Goblin Knight) have a Trait bundle (Goblin Serum). The impact of this is that some bonuses are not immediately obvious, and these characters may carry a few more Traits than many of the typical equivalents in BMG. In addition, all of the Goblin Cult (except Venom) have the Fly Trait, making them highly mobile. The array of Traits is likely the driver for the relatively high Rep costs of the SMG characters overall.

The high Rep costs means that an SMG crew looks lighter on numbers than many or most equivalent size BMG crews (at 400 Rep I would expect 6-12 models), making competing for Objectives a trickier proposition, and I guess forcing the Goblin Cult to take a swarm head on since they can be outscored simply by not being able to cover all Objectives.

I hope to answer these questions for myself fairly soon as Brummie and me have a game planned, allowing him to use some high value Free Agent, Sidekick and leader characters.
Posted by pulpcitizen at 00:44