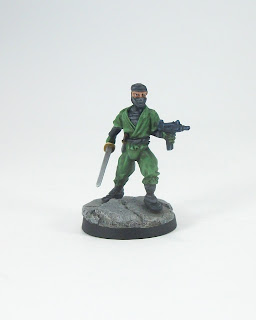 Kamakura is yet another G.I. Joe and Arashikage ninja - there sure are a lot of them! He was added to the canon in the early 2000's through the Devil's Due Productions comics, and later appeared in some G.I. Joe cartoons.

Kamakura is the son of a Crimson Guardsman who forms a bond with Snake Eyes, and in the DDP branch of the comics continuity and the action figure canon becomes Snake Eyes' apprentice. My main reason for adding him to my G.I. Joe Project was that I felt RAFM's Ronin mini was a good fit for the character.  Me and Brummie are constantly searching for options to fit G.I. Joe and Cobra characters, and successes in finding a mini which we can then match to a character drives additions to the project more than anything else. 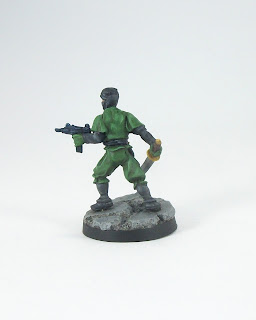 In preparing the mini I trimmed the sword back a bit (it was incredibly long!), and swapped his head for a spare Pulp City Ninja head that I had. Unfortunately my green stuffing around the neck was a bit rough, but it will do. I decided to use a different green than that used on most of my Joes - Vallejo Model Color Flat Green. The primary painting was pretty straightforward allowing me to make quick progress with base colour, washes, dry-brush and highlights. The colours are an approximation of one of the many versions of the Kamakura action figure, but not a like for like copy on the model's details.

I am hoping to get some more Cobra done over the next few weeks, although with Zomtober coming that will be dependent on available time. I have quite a few minis part -painted for the project right now that I really need to start finishing off.