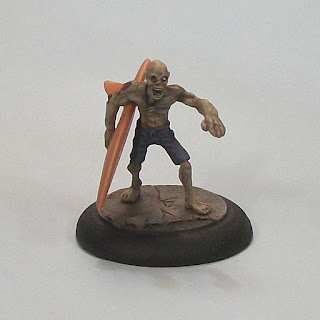 Another Hasslefree Zombie, painted with the tail-end of my recent Zombie splurge. I was unhappy about a couple of issues I had with this one. Firstly was the white undercoat I used: GW Skull White (possibly an old can). It gave a slightly fuzzy texture to the undercoat which although I have heard this happen to others has never really happened to me that I can recall (maybe I blocked out such trauma!). Having a deadline for a game we played last month, it meant I did not have time to strip and re-undercoat the mini, so I had to press ahead and probably ended up painting extra base layers as a consequence.

The second issue is definitely down to me. After the efforts of September I tried to go back at a later date to add a design to the 'upper' side of the board (as would be to the rider's perspective), but that did not turn out well so got painted over. My plan was clear, however my freehand skills were lacking and so I will not be trying again on this mini. I just decided to accept it as-is, rather than increase my own frustration. 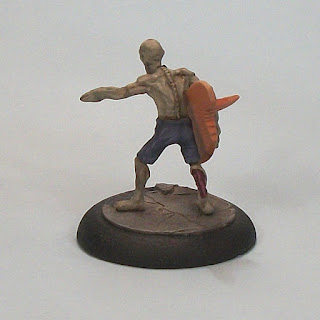 Anyhow, another addition to the 'horde', and expect an interim shot of the living impaired I have painted so far to appear very soon.
Posted by pulpcitizen at 09:45