Okay, this was a a typical surprise  for me - I say surprise as this was started after the other FCC, but finished before them, which is fairly typical for the random way I approach much of my painting!

The Saboteur is a model for the FCC House 9 faction for MERCS. In the corporately-controlled future world of MERCS, the FCC are an anti-corporate affiliation or largely like organizations that operate independently of each other.

House 9 is based in the middle and near east and may be considered freedom fighters or terrorists depending on point of view! The Saboteur exemplifies that idea with his rules representing his civilian appearance (harder to pick out among other combatants - penalty to hit; encouragement to allies if martyred - a bonus if removed from the game). Being armed with a a Molotov Cocktail and the futuristic equivalent of an AK-47 just finishes the package off!

It will be interesting to see how the game plays. Right now my focus for low model count skirmish games is on Pulp City; Anima Tactics; Freebooters Fate; and now MERCS. Each offers its own unique game-play features, and MERCS looks no different. I look forwards to finally getting to grips with some games when i have some factions painted up. 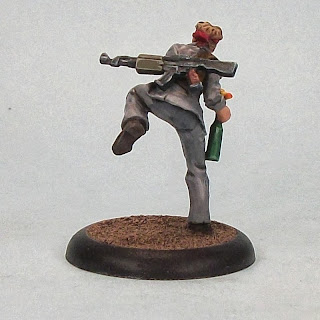 Colour-scheme wise, I have actually used the same palette that I am using on the para-military FCC House 9, so he should still tie-in with the rest of the unit. Hopefully work will continue on the remaining FCC before too long, and I manage to avoid too many other distractions.
Posted by pulpcitizen at 09:08