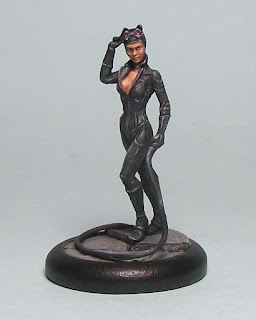 Catwoman is the first mini I have finished painting in September, and possibly the missing piece for a more robustly scoring BMG crew.

Playing in a recent tournament against Kieron (author of the excellent Cheaphammer!!! blog) gave me a healthy respect for Catwoman as a mobile model that should be given one task only - grab Loot! Doing so means she can score 2 VP per Round meaning she should have 10-12 VP scored per game if used right, which is not to be sniffed at. It potentially renders her a one-note model if I focus on the Loot-grab alone, but that maybe a price worth paying.

On the painting, I am in two minds - one moment I think the paint-job looks okay, while the next I think it looks a little rough in places. Part of that is that I struggled with the fine distinctions between different 'fabric' textures of her costume, but at the end of the day, she is painted which is the main issue. 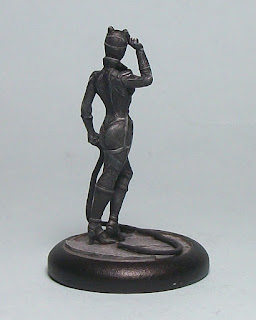 One thing with the BMG range that has struck me as odd with all the minis that have duplicate versions, is that there has not been a Dark Knight Rises version of Catwoman yet. Despite that, and despite the presumably diminishing likelihood of a DKR Catwoman,  Knight Models seem to be ramping up their monthly output, so currently I know I will not keep up with that, but I probably need to paint at least 1 or 2 minis each month to hold steady with the overall percentage of the range that I have painted.