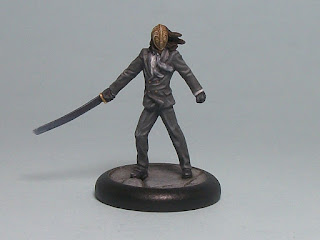 Benjamin Orchard is a fairly recent addition to the Batman mythos, spinning out of the the mythology that has built up around the Court of Owls. I gave the Court of Owls storyline a try in collected edition format, and was intrigued enough to pick up the tpb's of the related Talon series, and that is how I became familiar with Orchard.

The game rules do not seem a very direct translation of the comic character's rules, as when we meet him he is revived with the powers of a Talon, which he was briefly in the 1930's, and as grandmaster he appeared in the modern-day Talon series; in addition, the other Talons were only active one at a time, each killing their predecessor when taking on the mantle, so having a crew of them also places them in the modern setting. Orchard's rules don't include the abilities of revived Talons. 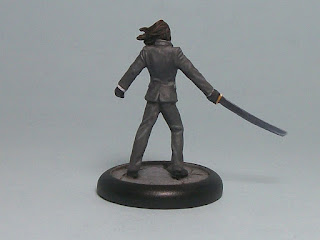 The mini is very uninspiring for me, especially when compared to the various Talon minis. One issue I had was that the proportions seem odd, with an over-long torso and very thin stature, but that may be just me. In addition, the casting was not great, so in all a mini just to 'get done'. Therefore when it came to painting the mini I was satisfied to take a 'quick and done' approach, especially as after finishing Catwoman, I expect my BMG painting output to dwindle for a while.

I do want to get a Court of Owls crew painted, but right now their biggest limitation is that with so few models, the largest game size they can play in is 300 Reputation, and since local tournaments are usually 350 Reputation, I won't consider them until they have some reinforcements. That aid, as they are kind of undead characters, I may justify painting one or two for Zomtober...