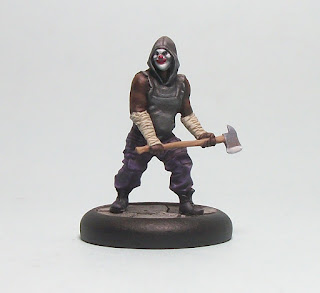 With the painting of first, my Gas Canister Objectives, and now this Henchman, my Joker crew building starts in earnest.

Originally I was going to put them in the orange jump-suits of the Arkham City game, as I did with Knife Clown, but after seeing Dan's Joker crew (here), I changed my mind. I have now settled on a mix of green and purple garments offset with grey vests etc., and probably some denim on the Elites. Knife Clown will probably have to have some kind of repaint eventually to fit in.

August is the first mini finished with the new colour scheme in mind, and was something of a test piece. How I highlight the purple will probably evolve as I paint some more. I have 3 more Henchmen started, although only 2 of those are currently planned for the crew. 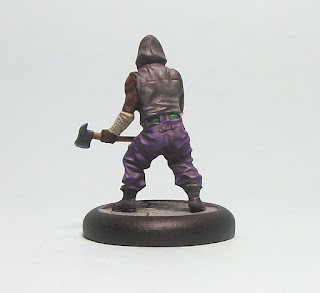 
With August now finished, and Hush painted a while ago, that puts me one quarter of the way to achieving this crew. I hope to add at least a couple more during December, and maybe finish the whole crew by January or February 2016.