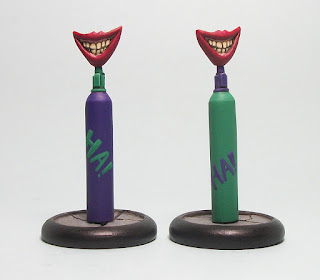 Okay, I admit I am starting work on a new crew. I hadn't planned to do a Joker crew yet, simply since they seem ubiquitous. However, given Knight Model's concentration on Joker (there seems to be a new option almost every month), I have relented in that stance.

Not sure whether or not they will get much game time; in 3 tournaments where around 40% of crews were Joker, plus some other games against Joker crews, I have only seen 1 crew use them in one tournament of 3 games. That says something to me. They are a mixed offering for Joker as each offers 1 VP per Round which opponent's cannot score from, and because model's Activating within 5 cm risk being damaged, that deters enemy model's contesting the, The downside is that to score, the Joker player has to risk his own model's on a Willpower test, meaning Leaders, Free Agents and Sidekicks offer better odds of surviving when scoring. 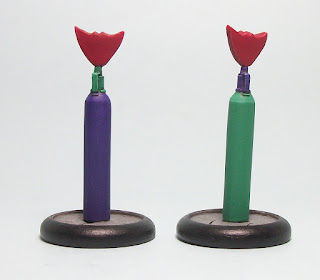 I started these Gas Canister Objectives many months ago thinking I would finish them quickly simply to get them done. That didn't happen. Cut to recent weeks when I decided to put together a Joker crew, and it was high time to get them out of the painting queue.

I am going green and purple on all models in some way in the new crew, but using a different tone of each colour to those used on the hard surfaces like these Gas Canisters.

I had planned to do the free hand 'HA!' twice on each of them, but trying to paint at an angle around a curved surface was enough of a pain to make me want to do it once only on each.

So, summing up, they have simple colour schemes, but I am counting them against my painted total for the year since they have a few colours used, some shading and some highlighting (plus I don't count terrain, so these offset that!).
Posted by pulpcitizen at 00:01