Another hobby year ends, and in all it has been good for me I think, even if I missed some of my painting goals.

This year I painted 63 minis, more than in 2014 and matching 2013. Among those I painted my first Warmachine/Hordes minis, and next year hope to get a playable force together. I also painted my first Tooth & Sword minis and have a whole heap more to tackle in the year to come.

I hit my targets for Tooth & Sword, Zombies and especially BMG. I missed my targets for Pulp City, Warmachine/Hordes and particularly Anima Tactics: the latter saw my motivation evaporate when Cipher Studios curtailed new releases to a few previously unreleased minis. I keep hearing rumours of a 'new' Anima Tactics and hope they prove true.

On the painting front for 2016, I have set more modest targets (read: realistic) for some ranges, and so have set an overall goal of 50 minis across several ranges comprising smaller goals, which I think is do-able. Time will tell of course!

I played more games this year than last, across several skirmish systems (Pulp City, Batman Miniatures Game, Across the Dead Earth, 7TV2e, Song of Tomahawks and Muskets and Freebooter's Fate). Thanks to Rob, Simon and Dan M. for the games, and all my tournament opponents. Thanks to attending some tournaments I got to meet fellow bloggers Kieron, Carl and Dan H. which was great. And in the past couple of weeks I have <ahem> acquired some X-Wing Miniatures Game stuff...

2015 also saw me managing to assemble and paint some additions to my terrain options, giving me many more choices than last year. I really enjoyed the Fabled Realms stuff, and discovering the cheap as chips TTCombat range. In all I built and/or painted 15 terrain pieces in 2015.

With Simon (cheers mate!) I attended a few shows and picked up some bargains, and one kit in particular that I have wanted for many, many years.

2015 also saw the second Kickstarter campaign which I am directly involved in, which was a very nice success, adding two new whole Factions to the Pulp City range. Don't let anyone tell you a Kickstarter campaign is easy - it isn't, and that was with four of us contributing (well done to all of us Maciej, Devon and Melvin).

So 2016 beckons, and hopefully with it plenty of hobby activity! 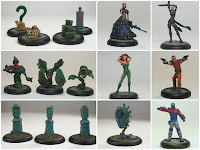 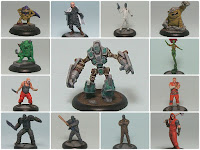 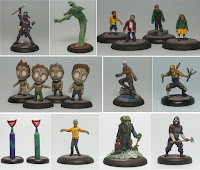