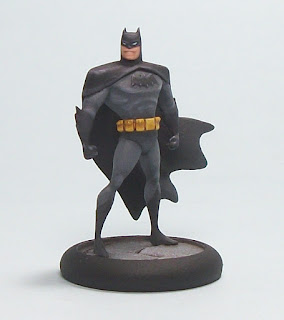 There are a lot of versions of Batman of the BMG range, and this became my favourite as soon as I saw it. That fact, combined with my need to get some painting momentum and motivation, made this the ideal choice to tackle as my first mini of the year.

For the most part the painting was really straightforward, and unusually and pleasantly for a Knight Models mini, it came in only two parts. In all it was done over a couple of sessions in a single weekend, which is quick for me! 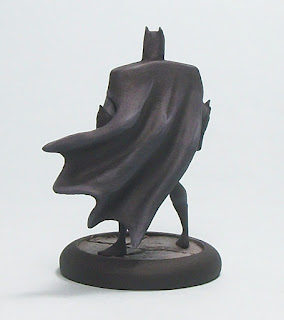 I am not planning a Batman crew any time soon unless there are a few more minis in the Animated style to accompany him (there is only Catwoman so far). That said, I suspect any additions in the same style would be nice and simple to paint, so they would jump up the painting queue simply for ease. However, so far Knight Models seems to just dabble in the TV related stuff in terms of specific ranges: 2 Animated minis; Arrow from the Arrow/Flash/Legends of Tomorrow milieu; Penguin from Gotham; Adam West Batman from Batman '66. Each seems to be crying out for more minis from the same source material.

I would love to see the a selection of characters from Animated series - any of: Nightwing, Robin, Batgirl, Robin (Tim Drake), Bullock, Commissioner Gordon, Renee Montoya and Gotham Cops as a mix of BtAS and the New Batman Adventures characters.

Still, I am off the mark on the painting front in2016, and that is the main thing. I  need to get back to painting my Joker crew and would like to get that done by the end of February.