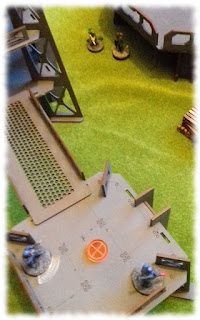 This week saw the inaugural play-test games for Squad Wars, using a mix of minis from mine and Brummie's growing G.I. Joe collections. My initial feeling was that a lot of things worked as I hoped and a few things need tweaking, which is all good.

We managed both a small and a medium sized game in less than three and half hours, which is without having played the game before and so I it felt it was fairly speedy overall, all things considered. That time included making a couple of cups of tea and stopping to have discussions about whether or not certain things worked to create a satisfying game-play feel, so ultimately probably closer to three hours or less in total for the two games played. 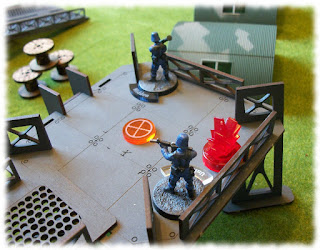 The games helped identify a few issues to fix - nothing fundamental but certain special rules and how they can be applied differently to improve the experience.

Brummie was really supportive and kindly gave feedback and insights, as well as noting the log of changes to be made and also took two of the pictures in this post (thanks very much mate!). 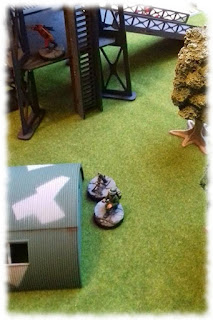 I wish I had taken more pics myself but I was understandably focused on the games themselves and talking Brummie through my ethos for certain design choices. I opted away from making a Battle Report at this stage as the key thing is getting the fundamentals right in terms of using time well.

Anyway, suffice to say, it feels on the right track of what I want and I hope to get more Squad Wars gaming in with Joes versus Cobra before too long.
Posted by pulpcitizen at 03:58