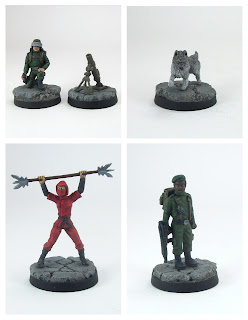 Overall I am pretty pleased with my volume of output, in the middle of my low and high targets for July to September, but overshadowed by the amount I painted in the same period in the year before.

I made significant headway into my G.I. Joe Project over the past three months, which was positive, especially as Brummie and myself have now managed to play a few games of Squad Wars to test the rules and iron out the bumps. This month I am taking a bit of a break from the Joe stuff, but I fully expect to carry on painting more next month. 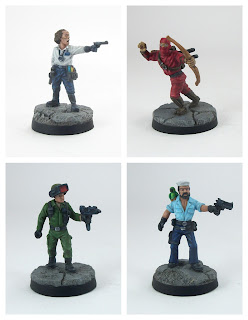 I also painted an Adventurer from the Meridian Miniatures Tooth and Sword range (that Bat Spell Caster below is not giant size - really!), which was pleasing as the range has been untouched for far too long after receiving my Kickstarter pledge.

This also lead to me starting and writing up a third draft of a set up rules for fantasy skirmish adventure gaming - 16,000+ words mainly written in September for that! I hope to get some fantasy scenery done before too long to go with more Tooth and Sword minis. 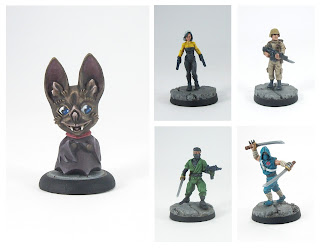 Finally, astute readers may have noticed an absence of BMG minis in the past few months. This is intentional. Basically due to concerns with how the 'official' BMG Facebook community is run, and specifically certain behaviours of its lead admin (most stuff I won't go into, but stuff that is so bizarre to sound made up in some instances, and just downright wrong in other instances), including exclusion of community members seemingly by whim in certain instances, including myself. Therefore, I am no longer buying Knight Models products, attending their officially-sanctioned   tournaments nor will I be blogging about their products until and if there is a notable change in the status quo. I have had civil conversations with Knight Models on the matter, and I have explained why I will no longer be supporting them or their products while the situation remains unchanged, and they have stated they are considering the situation. I'll miss attending the tournaments and playing BMG against Brummie, but for me it is a matter of principle.

Anyhoo, I am hoping to keep painting momentum through the next few weeks and will hopefully churn out a few more minis.