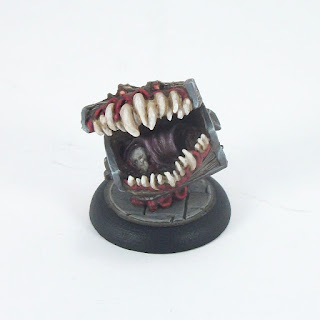 A bit of an odd one this, amid this month's Zomtober outputs, and mainly finished because Zomtober has seemingly reignited some painting motivation.

Mimics are tried and true Dungeons & Dragons monsters that have popped up in other franchises such as Japanese console rpgs. They are creatures which inhabit dungeons pretending to be treasure chests etc. in order to pounce on unsuspecting adventurers!

This sculpt is from Reaper Miniatures and is cast in their Bones material. I did a poor job of clean up, and I have to say I really don't like the Bones material at all. 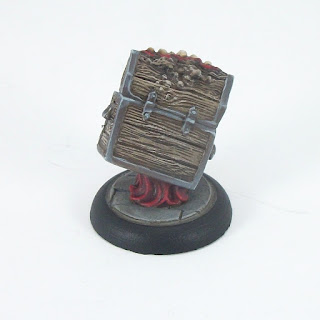 Cheap is great, but in hindsight I would have probably preferred to do this one in white metal, and would likely have cleaned it up better had that been the case.

I have a Fantasy Gaming Project looming (probably using Tooth & Sword minis for the protagonists and many/some of the antagonists), so the Mimic is intended to be part of that. I have already picked up another couple of Mimics from another manufacturer so expect to see something similar in the not too distant future. More details in due course!
Posted by pulpcitizen at 00:01