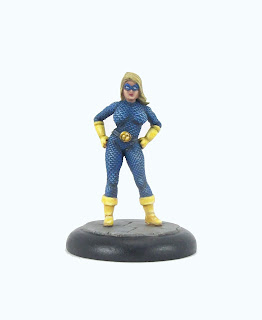 Blue Scarab is another of the minis I have had sculpted for my upcoming range Supers Unlimited. An out-and-put hero, she is based on a public-domain golden age character of yesteryear, and one I was really happy to bring via update into the twenty-first century.

I [plan to launch the range in January, so I am working to try and make sure I have at least one painted copy of each mini, and Blue Scarab is the latest completed.

I opted for a nice and simple blue-yellow colour scheme in keeping with the source character, accentuated by her blonde hair. 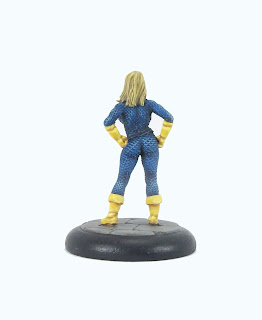 The Blue Scarab was a cop wounded in the line of duty, who survives her grave injuries thanks to the intervention of a scientist friend using an experimental procedure. Wishing to do more than allowed in her job, Dani Garret donned cutting bio-mimetic armour (also developed by her friend under Project: Beetle), incorporating a lucky golden scarab, and a mask and became the super-strong Blue Scarab.
Posted by pulpcitizen at 11:35