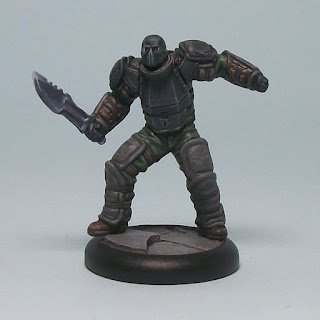 Anatoly is the last mini I needed for my newest crew. I had put off painting Anatoly simply because he looked the most complicated of the Black Mask Henchmen to paint of those I had chosen, but included him because I read some very positive stuff about how he functions in the crew. He looks to be a pretty decent and durable option for a relatively low cost, so all good. Unfortunately I have not had the time to get him on the table to try him out, so I am far from sure I will fully get to grips with him in the upcoming tournament!

The model had a horrendous mould line, one that meant I simply had to hack at parts with my scalpel to get something approaching a cleaned up model. That was compounded by Knight Models choosing that the model would be sculpted to struggle to fit on the designated base size, and he had a lump of metal that I wanted to cut away from his feet for aesthetic purposes. 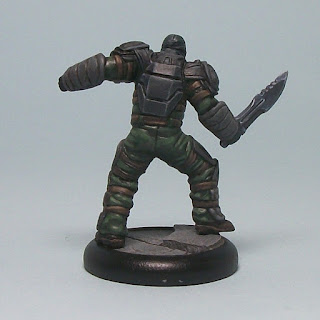 Despite all of that, and despite my reticence about painting Anatoly, I am quietly pleased with how he turned out. So much so, that I want to paint the last two Black Mask Henchmen I have (Mesh and Mule Goon) and get a few more games in soon with the crew. in addition, I have part-painted Scarecrow, so would like to finish him soon.