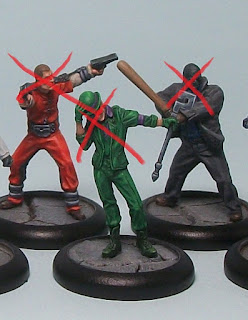 I regard myself as a skirmish gamer, but not necessarily a successful one! It has been nice to play the recent BMG tournaments and I plan to play more. That means getting a handle on a crew to suit me.

While I don't think there is such a thing as a 'perfect list' in pretty much any table-top skirmish game, I do feel part of getting the 'right list' as a player is having a group of models you feel you understand and that you feel function adequately or better.

I am still very much getting to grips with BMG, which is influencing my crew selections. For example, I am happier so far with Black Mask than Poison Ivy. I like Deadshot, as he has performed well in 4 games out of 5.

Some models just don't meet my needs, so time for more change: out with the old and in with the new! 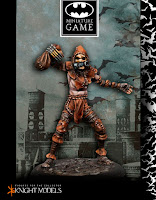 Riddler is going as his use is too specific for me, but accepting that others may get more out of him; he is helpful but maybe not the most efficient use of Reputation for my tastes. He can be devastating in combo, such as setting up a target for Deadshot, but effectively that almost doubles the cost of Deadshot to do that.

Turk has been a mainstay since my first games, but there are more efficient ways to add comparable or superior threat, with better range and/or fewer action Counters needed to attack at optimum rate of fire. Goon 2 has simply been underwhelming.

On the plus side, Anatoly has proved useful as a speed bump, tying up more expensive models used to quickly knocking out lower durability targets, so another similar option would be good. 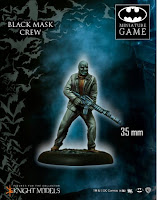 So what am I thinking of adding? At first I thought of extra cheap Henchmen to add to the 'swarm', especially as so far Black Mask is still quite reliant on the 'generic' Henchmen, but then I thought I need more of a mix.

Currently I am thinking of: 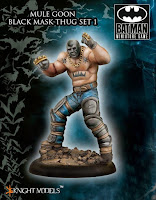 I could take 2 cheaper Henchmen instead of Mule Goon, but that doubles the VP available to an opponent, so sometimes 'less may be more'. Identifying these changes allows me to plan for the next tournament with something closer to the 'right' crew for me.

Basically, in looking at the basic Damage output of Mule Goon against Defense values 2 to 5, he is more cost-efficient than either Prisoner 01 or Goon 2. That is not factoring Collateral Damage, but it is telling enough for me. On the durability front, Veteran and Sturdy make the Mule Goon a potentially tough proposition, and not readily taken down in a single attack except maybe to pesky 3 Blood attacks. The more I think about it, the more I think taking Mule Goon will add some better balance to some of the other cheaper Henchmen.
Posted by pulpcitizen at 14:12