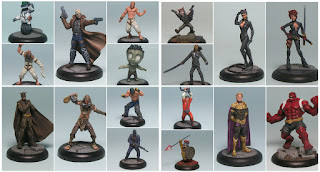 After finishing with V.H. (Pulp City) and Benjamin Orchard (BMG) in September, the third quarter saw my best output in terms of number of models this year, despite a relatively lean end with only 4 painted minis in the last month. That said, I doubled the output of the same period in 2014 and a little extra! So that was nice to say the least.

That takes me to 46 minis for the year. My BMG painting is well ahead of target; Pulp City is now probably on target for the year; Anima Tactics is so far off target it is hard to even consider. Overall I have since hit my low target of 50, but will probably miss my high target of 68.

I have started on painting my first Tooth & Sword at last, and will paint some more soon. Zomtober beckons of course, so I am hoping for a good October, and that may even include at least 1 Anima Tactics mini. I want to paint at least 4 more Pulp City minis this year, and have designs on painting a third crew option for BMG....