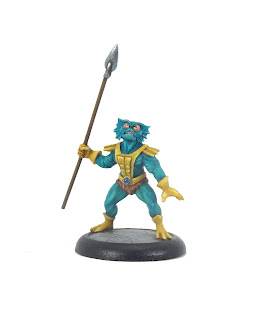 Mer-Man was always one of my favourite Masters of the Universe characters when I was a young kid, and I am pleased to have painted him up for tabletop gaming as a much older kid!

Ruler of the undersea realms of Eternia, Mer-Man was forced to serve in the armies of Skeletor after his kingdom was destroyed in a battle with rival ocean clans. His allegiance with Skeletor brings him to the surface world more often then he would like. Lurking deep beneath the Sea of Rakash, Mer-Man awaits the evil call to arms of Skeletor! 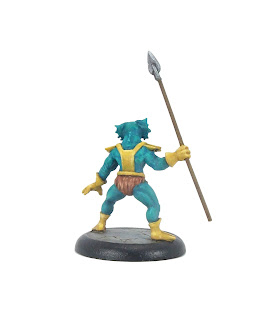 The miniature is from Quest Miniatures, from their second wave; it is a lot nicer sculpt than then last one I painted (Moss Man from wave 3), and therefore a more enjoyable painting experience - the sculptor of this and the other wave 1 and 2 minis is Boris Woloszyn and I love his evocation of a MotU style, and think his approach is a wonderful fit to the genre (I suspect design choices of weapons were down to Quest Miniatures rather than the sculptor). The only change i made was replacing the spear haft with brass rod.

Finishing Mer-Man brings me to three painted Evil Warriors so far, along with Skeletor and Beast Man. Hopefully I can get a couple more Evil Warriors done soon before turning my attention back to the Heroic Warriors. 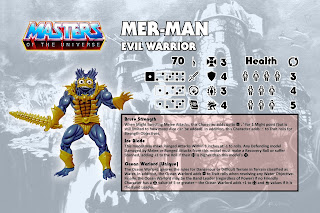 Although Mer-Man is often portrayed as somewhat cowardly he also has a history of being an Ocean Warlord, which I have tried to reflect in the rules I did for my personal MotU skirmish game. I need a few more painted up to get started with gaming so it is certainly time to motivate myself.
Posted by pulpcitizen at 12:43