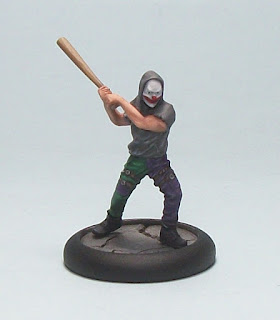 This is my just-finished Contra-Auguste, another Joker Henchman. I had planned on building up a Joker crew as mentioned a while back, but I got sidetracked when the last Court of Owls crew box was released as that was a far more appealing option for me. In fact, I think I have painted 10 other BMG minis between this Joker Henchman and the last (August).

I completed Contra-Auguste primarily as I had a little spare time and some 'extra' painting motivation while working on an unrelated mini, and managed to get a good chunk done earlier in the week after previously starting and abandoning the mini (I started a few Joker Henchmen at that time to speed up some of the painting). That said, The next crew I want to finish off isn't Joker, and is one I hope to conclude within the next two months (a personal deadline). Then again, I think I have a Joker list in mind which only requires me to finish 3 more minis, so who knows? Painting Contra-Auguste puts me just 1 mini short of  my BMG painting target for the year, with 9 months to go, which I think will be safely beaten. 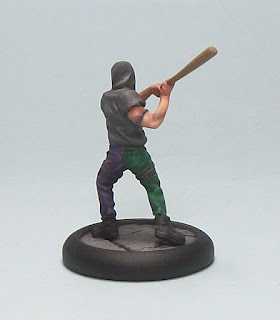 The mini suffers unfortunately some of the common issues of Knight Model's casts, and was not a crisps cast. In addition the super-soft metal used saw me bend the bat after painting was finishing with light accidental finger pressure. The metal compound seems to vary significantly between models I have from the range.

I game terms Contra-Auguste looks an interesting proposition; I am not a fan of the Bat/Baseball Bat weapon, as I think it is inefficient, but with the model's Obsessive Trait he actually damages on a 3+ against the first enemy he starts attacking until that enemy is KO, but has to carry on whacking it into the ground so is a win-lose proposition. His Defense 3, Endurance 5 and Hardened should make him surprisingly durable for such a relatively cheap (in Reputation) model, which is part of the reason why I had planned to include him in my Joker list.