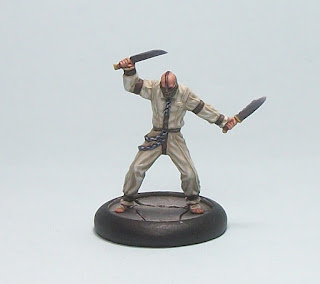 A couple of hours work and I have added a surprise completed mini to my BMG collection. I say surprise as I had a notion of doing High Security soon, but wasn't sure when I would get around to him. Well a couple of hours spare during annual leave today saw him done, and he will probably get an outing next week as part of a Poison Ivy crew. For a quick turnaround i am pretty satisfied with the results.

I had put off painting more of the Prisoners as I was becoming averse to painting orange (probably my least favourite colour to paint), but a week or two ago I had an insight into how I could tackle High Security - make him match my Arkham Asylum inmates such as Pavilion A Subject and File No. 08923. As soon as I decided that, he jumped up the mental painting queue, then circumstances arose to give the Poison Ivy crew a run out, and sudden painting motivation hit and he was finished pretty quickly. 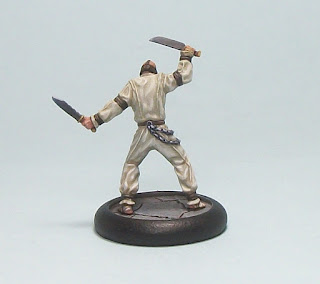 High Security is my tenth BMG mini of the year, out of an original target of 12 (I had planned one pre month...), following a few days after finishing Nathaniel and James O' Malley for the Court of Owls. I suspect I will exceed that particular annual painting goal, and the sudden momentum is helping my overall productivity which is nice.

In game terms I read good things about High Security. Certainly, at 48 Reputation he is not a cheap Henchman, and I dismissed him early on because of that, but Combo with Knives, coupled with +1 Strength and CRT: 1 Blood from Devastating Blow makes him a real threat, especially if he can take out an enemy model early in the game.