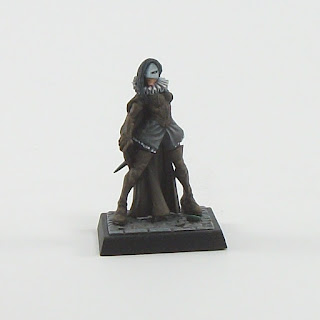 My Brotherhood crew's ranks grow again - finally! I have finished Bonaccia some 18 months or so on from my last Freebooter's Fate mini (Trucco).

I started Bonaccia a long time ago, some time in 2015, possibly even earlier. But I just kept putting her to one side, and not finishing her. Recently I was determined to rectify that, and so she is now finished, even if not my favourite paint-job in the crew (I think partly due to the colour scheme I selected). That said, being 'done' is the most important thing, so another mini is chalked off. 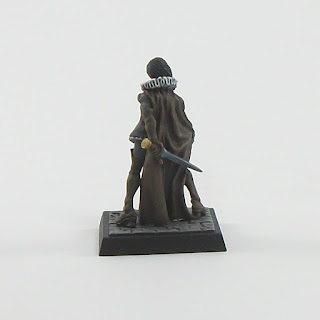 As another Specialist, the nearest comparison I have so far to Bonaccia is Apagado. Bonaccia costs 5 doubloons more, for which Apagado has a slightly stronger left-hand attack and slightly more vitality, while Bonaccia gains Blade Mistress, adding +1 Attack which is very good! I am sure Rob won't be looking forward to facing her with his Pirates! Then again he will probably shoot her as much as he can after recent experience.

Bonaccia takes my crew to a total of 495 doubloons. I can take one more Specialist and still make a game-legal crew (the Brotherhood may take up to two Specialist per Deckhand, and I have two of the latter), so I will need to have a think about what I paint next for the game. I am tempted to paint another Brotherhood Specialist, but I could opt for my first Mercenary instead.

I hope Bonaccia gets a run out on the gaming table soon, especially as I have recently acquired a cool-looking gaming mat for our games.