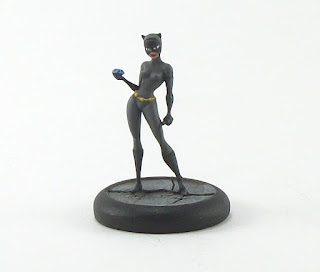 Catwoman (in the Batman Animated style, after Batman in January) is my 44th BMG mini I have painted. This was a 'quick and done' paint-job because my painting momentum has recently dissipated. I decided I was going to get her finished today, having previously applied the main grey colour only as a consequence of painting something else, then painting the belt, then putting her to one side for a few weeks.

Overall I am happy with the simple paint scheme and results, and it is nice to have another mini 'done' this year and especially this month. Hopefully this kick-starts me into finishing a few more minis from different ranges and games this month. 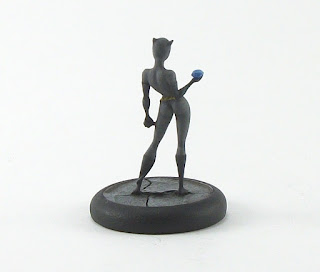 I think Knight Models did a good job translating two-dimensional cel animation into a three dimensional sculpt. The model is a single piece which is a nice change for this range, and the only real hassle was needing to trim the slotta tab to fit a channel I widened in the base (this is because I want all my painted BMG minis to have the same base style - Fraktured from Dragon Forge Designs, and this sculpt has her whip trailing along the slotta tab).

I don't really foresee using this version of Catwoman in many games, basically as for me she does not stack up well enough as an alternative  to the Arkham City Catwoman. The main reasons for that are lack of extra VP scoring; Endurance 4 which makes her vulnerable to attacks doing 2 damage; and Willpower 5, making her available counters for Dodges and move and Defense more limited. That aside, I really do like the mini as I am a big fan of Batman the Animated Series and related shows. When I eventually have a few more Animated-style minis done I will do a group shot of them together.