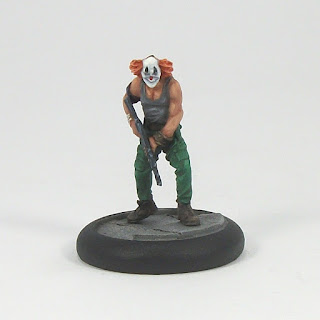 Sniggering is done, but he is far from a favourite mini, on that more in a bit. The model is the third Henchman addition to my planned eventual Joker crew, and it is pleasing to have regained some momentum this month as this is the fifth mini I have completed across three ranges.

Sniggering has the always threatening 'Automatic Rifle', easily one of the best weapons in the game and one that is well worth its cost as it can create a sense of threat for most characters. In the tournaments I have attended, I rarely see any crew leave out their automatic rifle option if they have one. It seemed sensible to make sure Sniggering made it into the list. End 5 and Willpower 5 gives him a decent opportunity to ensure he can use his weapon even if attacked, while retaining mobility or capacity to reload from Ammo. 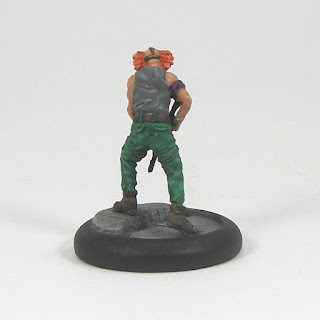 On to the mini. Not my favourite as I said. The casting was rough as heck in places as can be seen from the poorly cast wrist bands if you look closely. Parts were also a bad fit, which may be partly due to some of them serving for different models. And because of the design, some places were really hard to reach with a brush, which only became apparent as I progressed. I started painting Sniggering at the same time as August, and he got abandoned part way through as I concentrated on other stuff, but in the past few days I resolved to thin down the backlog of part-painted minis and this became a prime target. the current list I am thinking of taking is: Joker (Arkham City); Hush (for Take the Lead and Strategy shenanigans); Victor Zsasz; Sniggering; August; Contra-Auguste; and Six (the tournament Joker Henchman card). To make that up would take three more minis which isn't too much, so could be done this year.