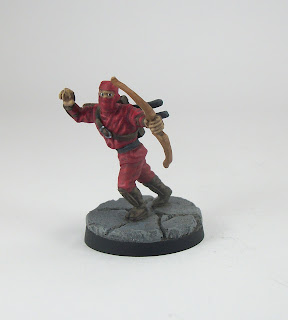 Red Ninja Viper (or Red Ninja depending on which version of the source action figure you refer to!) is my latest addition to my G.I. Joe Project, serving the enemy forces of Cobra. I prefer the longer Red Ninja Viper name as it just sounds cooler to my brain and ear.

The character is far from a leading light of the canon, and is among a plethora of ninja types that thread through the G.I. Joe mythos. It is a character 'after my time' so to speak, and only one I came across while researching options for the G.I. Joe Project. In Squad Wars games I am probably going to pitch him as an individualised character, but effectively an 'extra' type for bulking out the Cobra forces with some extra individuality - that may change though. The mini itself was a spare copy of Storm Shadow that I had from a friend's private commission, so be sure to expect a white-clad ninja before too long. 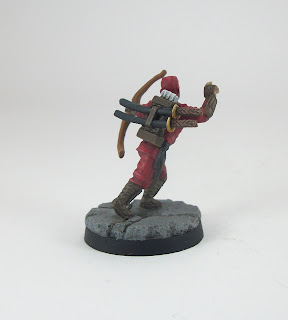 For painting I went with a bit of a hybrid of the various incarnations of Red Ninja/Red Ninja Viper. I started painting the mini at the same time as Jinx but fell behind with this one while stuff like Stalker, Timber, Shipwreck and Short Fuze got finished instead. Thankfully I have been able to retain some painting momentum and was able to get the mini finished while working a little on some other characters.

I reckon Red Ninja Viper may get a run out before too long as Brummie has recently gone into painting overdrive (check out his blog to see what I mean - link here), meaning that collectively we have a lot of characters to choose from to start gaming with.

Coming up I have a mix of Joes and Cobra in various stages including: Baroness, Duke, Gung Ho, Rock N Roll and Roadblock. Of course with my random approach to painting that could mean something else entirely like a Cobra Ninja gets painted instead....