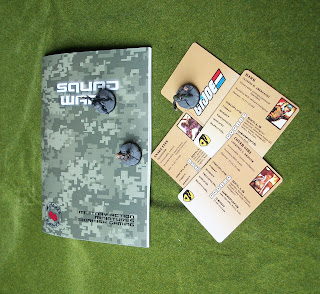 When play-testing I like to have game materials to make things easier. For Pulp City, this meant facsimiles of game cards where possible, as well as a copy of the rules text to hand.

While developing Supers Unlimited and Squad Wars under the Kitbash Games banner, I have taken things a step further. These projects are obviously deeply personal to me, and so I want to get things as right as possible. Just having a very rough draft copy of the text to look at helps me think about how pages could be laid out, the sequence of things, etc. In the past I would work with pdfs of simple Word layouts. This time, and to help my own personal thought processes, I decided to go a step further and get mini books printed. 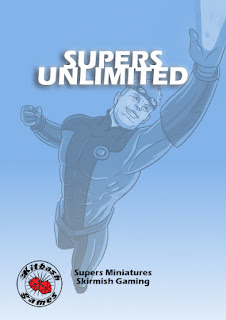 In addition, with my G.I. Joe Project underway - and which will be the main vehicle for play-testing Squad Wars - I decided to get cards for the various characters printed up as a motivator to play. That may sound unnecessary, but from my time with Pulp City I saw that testers gave more feedback if they had print outs (from Word) at roughly game card size for characters than a primary Word document not formatted down to game card size. They gave more feedback again if they had draft versions of the final cards. So from that learning, I have developed cards as something to hang games of Squad Wars onto, and will do the same with Supers Unlimited at some point.

Since both games feature 'build your own' rules for Characters (they have some nominal IP, but that is to help give some contextual pointers and supply pretty pictures to look at!), players can just as easily use a roster sheet, whatever takes their fancy, they don't have to use cards like I have developed (although templates will be made available at some point).
Posted by pulpcitizen at 08:22