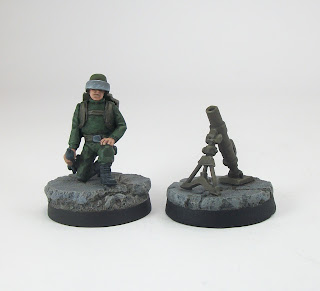 Short Fuze marks my ninth Joe character finished, and eleventh mini for the project as a whole. I started this one a whole ago but slowed down as I found a few bits awkward to paint. I picked him up again this weekend and was able to make more headway, enough to want to finish him.

Most of the original G.I. Joe team had very similar uniforms, so expect a few more that don't look too dissimilar before too long in among the more varied later characters. Regardless of the uniforms though, I will probably mainly stuck to the same base green colours for fatigues and helmets to add a little coherence. The original figure had black webbing straps and a green backpack; I decided to go for a dark olive colour as a bit less stark than black. In my overall painted minis tally for the month, quarter and year, I am counting Short Fuze and his mortar as two separate minis - that seems fair as they are on separate bases! 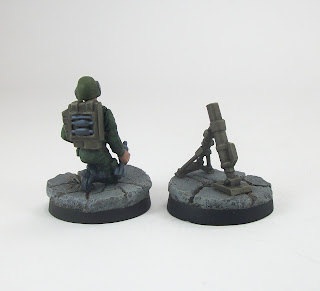 Short Fuze was the team's first mortar specialist (but not the only one!). In the canon he is a solider from a military family, with a logical and thoughtful side although with a noticeable temper. Reading the comics, he is certainly not a top tier character, and is generally just 'there' in the wider ensemble.

In developing Squad Wars, Short Fuze gives me a chance to try out the rules for mortars which naturally have a few wrinkles to them.