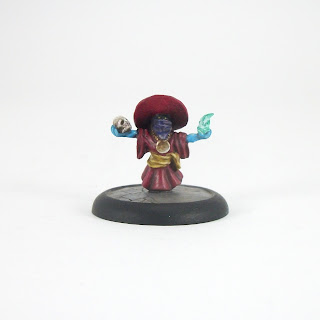 New year, new project, as Orko is the inaugural mini in what I hope to build as a Masters of the Universe (MotU) Project.

Before continuing I just wanted to apologise to other bloggers for not commenting on your posts in the past couple of months as I have been in something of a hobby slump on the painting side of things. 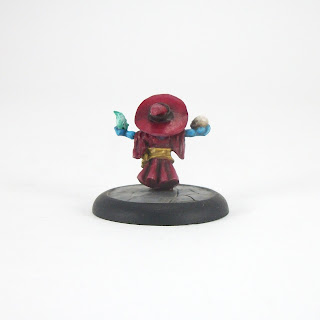 So a new project eh? Simply put - yes! MotU is one of my grail IPs along with DC Comics, Marvel Comics, G.I. Joe and Star Wars. I see FFG are doing an excellent looking game with Star Wars Legion, but I don't have the appetite for mass-battle painting, so I am passing on that, but recently I have started to look at options for MotU and when more have materialised, a plan was hatched!

This mini is a Halfling Wizard from the excellent Heresy Miniatures. Although not an exact likeness of Orko from the 80's MotU cartoons (and soon after made into an action figure when he became a popular character), he was close enough for my needs. Like most characters made into action figures, Orko's look has evolved over the years, and so I took some hints from a few different versions in painting him. Strangely enough, I probably like the character more than I did as a youngster when he lacked the cool factor of He-Man, Man-At-Arms, Teela et al. 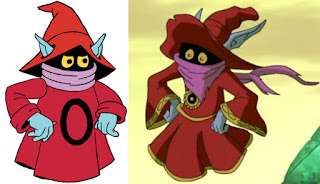 I bought the mini years ago and he sat in the minis pile for far too long. When I finally tackled him, Orko was actually painted quickly by my standards, in a couple of sittings yesterday afternoon. The only change I made to the mini was to snip away the long hair it had at its back. Unfortunately the paint-on varnish came out a bit shiny but I can live with that (weather too poor to use my usual Purity Seal).

I have a few other minis on order to represent other classic MotU characters, and I have already started gaming plans, which has involved writing a game and I think I will find a use for that dungeon terrain I showed in a post a couple of months ago (which could be tunnels beneath Castle Grayskull, Snake Mountain or Castle Eternia).
Posted by pulpcitizen at 07:26