Another hobby year comes to an end, and to be honest it has felt like a bit of a mixed twelve months personally, so I am hoping to use January 2018 as a fresh start.

Outside of my own hobbying, it has been great to see what other bloggers have done over the year, especially in the annual Zomtober outputs - well done to everyone.

This year I managed to paint 62 minis across 10 ranges/projects, a bit of a drop against 2016's 67 minis painted. The beginning of the year saw Knight Models drop its Marvel license (or be dropped by Marvel - speculation varies as to which of those is the case), curtailing my SMG and MUMG projects. After a slow start to the year things picked up, but I had no motivation to paint in December which felt like a missed opportunity, but I really can only face painting when I do feel sufficiently motivated.

I only managed to play 13 games, mainly because I am no longer playing or painting BMG, which meant my usual four or five tournaments attended in a year was only one in 2017.

I have added to my terrain this year, although a lot of it hasn't been blogged; I have built more 4Ground stuff including Valian's Stables which my thoughtful wife got me for Christmas and which was tackled over a few sessions. A post of that will follow soon-ish.

In February I left Pulp Monsters after a few years of partnership and working to develop the game and its characters. There were a few reasons which lay behind this decision, but it was the right one for me and I wish the Maciej and the Pulp City game and range well. I also started serious work on developing my own Kitbash Games products which I hope to release as low-cost books via Wargames Vault in time - this is taking longer than planned, but I have gotten to a stage where I need to teach myself some new skills to progress. On the industry side of things there have been a couple of set-backs, mainly due to people not doing what they had committed to. On the plus side, I have started work on an editing polish for supplementary material for an existing game which is an interesting job and should be finished in January (at least on my part).

My painting in 2017
I once again set a high-end target of 60 minis for the year and again thankfully exceeded that. I think I'll be setting the same target for 2018, and will be adding in another new project (since my Knight Models projects are on hiatus for now), which will be in a new scale for me -1/35! 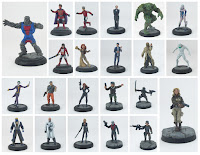