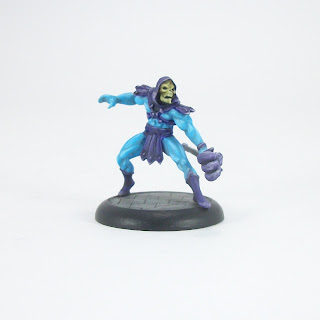 Skeletor is the second painted mini for my Masters of the Universe Project (after Orko), and  my first for He-Month.

My order from Qminis (click for link to Qminis Etsy store) arrived mid-week, but then I was hit by a heavy cold, so I didn't feel up to prepping minis until yesterday. I put together Skeletor, Man-At-Arms, Beastman and my four Hover Robot proxies, then tackled painting Skeletor today.

The paint scheme is super-simple, mostly influenced by the original toy and the 1983 cartoon, although I painted the shaft of Skeletor's Havoc Staff in near black to break things up a little. 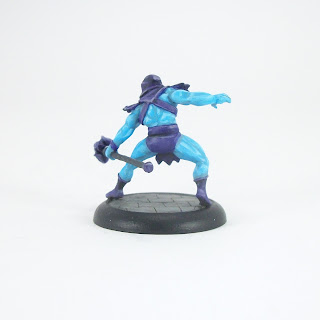 The Qminis sculpts are clearly based primarily on the 1980's Filmation He-Man and the Masters of the Universe cartoon rather than the original figure line, and this keeps them mostly nice and straightforward to paint (not that the action figures were especially fussy in their designs).

I think Skeletor has a really visually distinctive design even over thirty five years on, stronger than his rivals Hordak and especially King Hiss. And I am glad the mini kept to the classic elements. 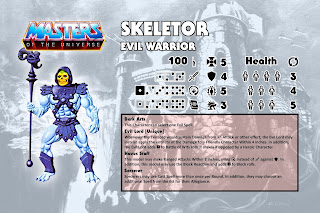 I have nearly finished my first draft rules for Masters of the Universe gaming, and the bottom is the game card I have done for Skeletor. He-Man will be a better warrior, while Skeletor is more crafty and cunning, and of course is a master sorcerer.

Finally, if you are looking for MotU minis and proxies, I did a post earlier in the week giving a list of options (click for link).
Posted by pulpcitizen at 11:35