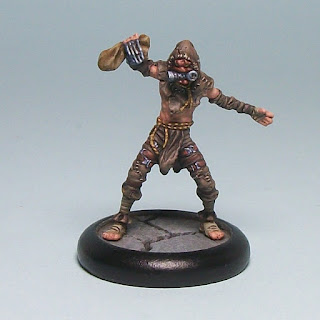 And Scarecrow is done! This mini has been sitting part-painted for quite some time, but my recent tournament experience made me resolve to finish it, pushing me forward on my BMG productivity. This is Arkham video games version and not the classic comics Scarecrow, but nonetheless I like the raggedy-ness of the design, so it definitely fits the bill for me.

Painting-wise, I wanted something using a palette of browns less orange-y than the studio version. While the first few stages of painting were ad hoc and slow, once I had painted the leg straps and the ropes, the rest was finished quite quickly. It is nice to get another mini painted, and I very much have the tournaments I have been attending recently to thank for that increased impetus. It has been great to play new players at a new (for me) game, knowing that I should have more opportunities to do so in future. 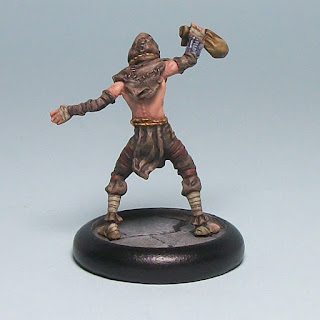 The reason I pressed ahead with Scarecrow was to get a replacement in for the Riddler. I included Riddler in my Black Mask crew mainly for 'game management' purposes - the non-Damaging stuff - which he is very good at, but the down-side was that on his own his combat capabilities are pitiful. This version of Scarecrow offers some game management  (but maybe less than the Riddler) through his Persuasive, Psychologist and Undercover Traits, coupled with a de-buff template attack (more game management) and a 1 Blood close combat weapon. With 4 Attack he presents a threat in a couple of ways, and could be used to potentially finish off KO models if he works as I think. Definitely not a front line fighter, but potentially a useful character in tandem with one or two Henchmen, and something to get to grips with, not least as his Effect-based spray attack is functionally different to a Damaging spray since it affects targets automatically; this is is actually explained in the living FAQ and not the main rules which is an unjustifiable oversight IMHO, especially considering it impacted pre-exiting models such as Scarecrow (this one and the Dark Knight version) and Arkham version Poison Ivy.

With a Scarecrow crew on the eventual horizon as indicated in the BMG book, I full expect a third Scarecrow mini to be released at some stage to complement this one and the Dark Knight version; it will be interesting to see which way they go for that.