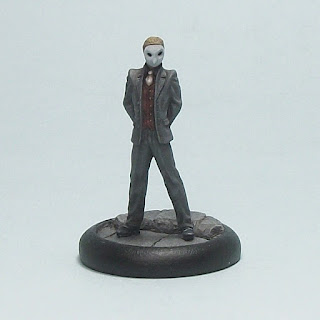 Another painted addition to my BMG collection - the High Court Member is the second Leader choice made available for the Court of Owls, and easily my preference of the two, both due to its rules versus those of Benjamin Orchard, but more especially because I think this is the considerably better sculpt of the two. The painting was done pretty quickly as I had a sudden burst of motivation.

I have not yet done a really close comparison, but I suspect the sculptor re-used the Black Mask mini as a dolly basis for this sculpt - not sure how I feel about that given the premium pricing of the range. It is certainly not the only example of Knight Models doing that, and is something common in unit based gaming, but still it feels to me like a bit of a short-cut too far based on pricing for things that are in essence unique character models. Nonetheless, it is for me easily a superior sculpt to the awkward-looking Orchard. 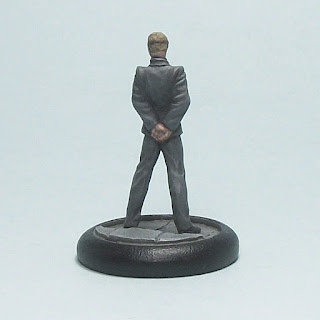 In game terms there are a few key differences between the two Leaders, with the High Court Member offering advantages in:


The downsides by comparison are lower Movement, lower Willpower and lack of Veteran (which is useful for defensive purposes).

I fully expect the High Court Member to get a run-out in my next game (I am facing a Bane crew for the first time that I can recall) and most likely at the upcoming tournament.