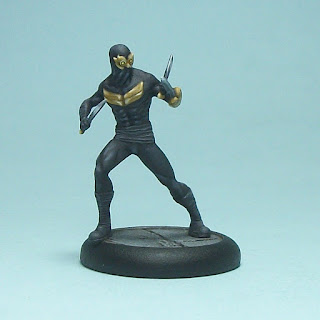 Brandon O'Malley is my sixth Court of Owls mini (my fifth Talon), and finishing him gets me to a playable 350 Reputation crew for the Court, which is ideal as I am planning to take them to a 350 Reputation tournament in March.

I started this mini a week ago, along with the James and Nathaniel O'Malley minis, in order to put the main blocks of colour down on all three, before just focusing on finishing this one - the other two will get done over the next few weeks I hope. I have to admit, I don't have much stomach for batch painting these days, so the decision was the right one as it got this done quicker than might have been the case had I persevered with all three together. That said, looking at the photograph of the back of the mini, I am not sure if I have misjudged the right hand edge of the 'gold bars' on its back; if that is the case it will be a quick fix. 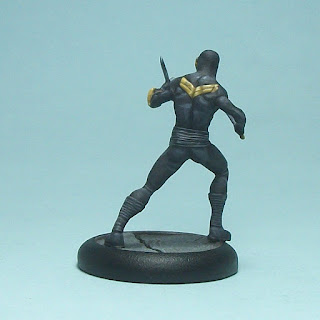 In the comics, the Brandon is the middle generation of three O'Malleys who have served the Court of Owls, and we encounter them as the hunt Calvin Rose, the most recent Talon.

In the BMG Court crew, Brandon O'Malley is probably the second or third hardest-hitting character they have currently, roughly in line with William Cobb depending on the situation, but both behind Strix. I shall soon get a better sense of things as the Court are getting a run out against Brummie's Penguin crew on Tuesday!