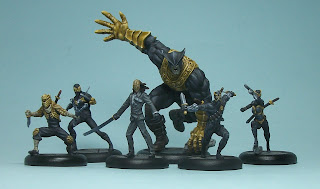 This will be my first Court of Owls crew which I take to a tournament. I am looking forward to using a new crew with different qualities to my existing options (Poison Ivy, who I haven't really got to grips with; and Black Mask, who I would probably be sticking with if it had a few more affiliated Henchmen options).
The line-up comes to 350 reputation and $1100 Funding (these models cannot actually take any remaining Equipment options. I think that on first glance, until I get a few games in with them for better insight, there are a few inherent strengths and weaknesses:

In terms of combat it is looking like these 3 are my best and most efficient combatants:
In terms of 'to hit' and 'damage' probabilities, the Butcher is simply not as threatening as he looks.

In terms of mobility, Strix and the Butcher are pretty evenly matched, while Brandon O'Malley offers Tireless for cheap Running.

Defensively Xiao Loong is hands down the best option, in close combat at least, while Strix has Acrobat (for Dodge) and Butcher has some durability with Tough Skin and Endurance 8. What may not be immediately apparent to opponents is that through a relative lack of Free Agents and Sidekicks, the crew gives up a relatively low VP total for KO models, but a relatively high VP total for casualties.