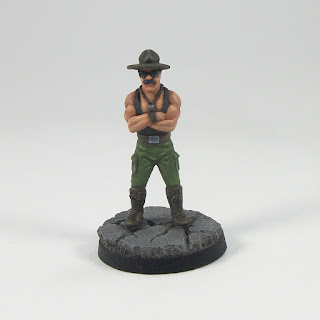 Only my second painted mini this month, and a bit of a surprise, even to me. A couple of months ago I would not have envisaged on starting yet another project, but I suspect that in painting Sgt. Slaughter I may have done just that!

I first encountered G.I. Joe through Action Force and Marvel UK in the 80's. Over time I grew to understand to rich background more and more and the distinction between Action Force and G.I. Joe, but then left it until IDW comics relaunched G.I. Joe in 2008. There are 4 or 5 IP's I love above all others, and G.I. Joe would certainly be up there. I was lucky enough to get hold of this mini and others from someone's private commission and they are not available commercially. 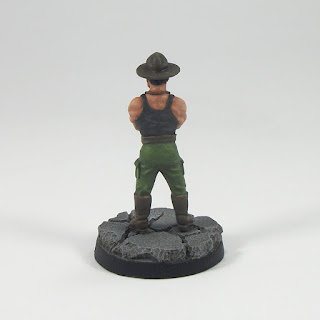 While not my favourite character (that would be one of several: Beach Head, Snake Eyes, Chuckles, Lady Jaye, Flint or a few others - they have a lot of characters!) , I thought former WWE/WWF star turned G.I. Joe drill sergeant Sgt. Slaughter would be a good tester for the olive colour I had in mind for some of the Joe's uniforms. I didn't follow the exact colour scheme on the action figure versions, but went for something that felt right with those points of reference.

The base is by Tiny Worlds, and I will certainly be getting more - I am very impressed with the first ones I picked up from them.

I have been very inspired by the thought of painting some more G.I. Joe minis, to the extent that I have been working on some game ideas, and re-purposing some previously unused game development work. The rules I am working on have the working title of Squad Wars (there is a reason or two behind that title), so hopefully this year I may get some G.I. Joe (and Cobra!) gaming done. Watch the blog to see how I get on.