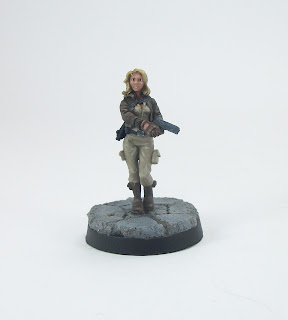 Cover Girl is the fifth of my G.I. Joe Project outputs this month (sixth overall), and like the others comes from a private commission. I started the mini at the same time as Hawk, but after initial progress suggested Cover Girl would be finished first, it ended up that Hawk was the first to be completed a couple of days before her.

I didn't really encounter, or at least notice, the character in the 1980's when reading Marvel UK G.I. Joe reprints or the original Marvel UK Action Force material. However, but when IDW (a smaller comics publisher, and lately a publisher of games etc.) started producing their new G.I. Joe comics she was introduced in the second year, which was my first proper exposure to the character.

In the main canon Cover Girl is a specialist armoured fighting vehicle driver, but also works as an undercover specialist in later stories. Although I have seen her shown as blonde and a red-head, I settled on blonde as I have Scarlett and Lady Jaye still to paint up, red-head and auburn respectively. 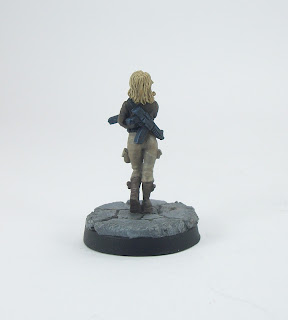 I hope to keep my painting momentum into the next couple of months on my G.I. Joe Project to enable some Squad Wars play-test games pretty soon with Brummie (click for link to his blog).