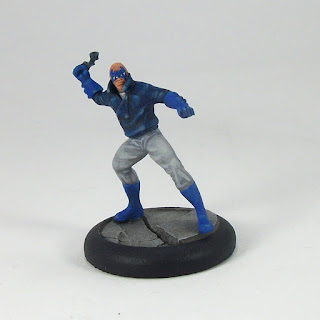 Son of Batman 01 is the first BMG mini I have finished in seven weeks, mainly due to a big painting slow-down in June, and also a conscious effort to get stuff done for other ranges. That said, I plan to finish the other Sons of Batman in the next few days, so more BMG will be on the horizon. I painted this one first to quickly test out how I wanted to tackle the colours, so it is very probable that the other two will be tackled as a pair. Unfortunately the pictures make the eyes look a little wonky; I don't feel they are as misaligned up close. Not a great paint job, but it will do.

The Sons of Batman are Henchmen options for Batman crews naturally, and were featured in the Dark Knight Returns comic from the mid 80's. They started out as members of the Mutants gang in that story, and with the Batman's return, some became vigilantes inspired by the legendary hero. 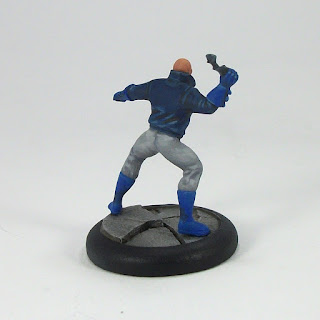 In game terms they are additional Henchmen choices, and give an alternative to the various Cops. This one is very cheap at 14 Reputation and $100, and seems ideal for sitting back and guarding/contesting an enemy Objective, likely equipped with a Whistle. If I put a Batman crew together at some point, I can imagine using at least two of the Sons of Batman, but possibly not all three since I feel the Reputation cost for one is too high for what he does.