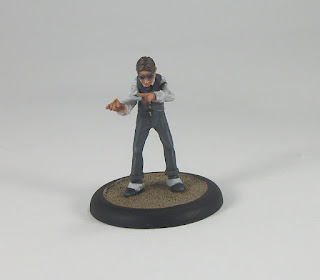 Mr. Tannen is the second Malifaux mini I have finished (after Mr. Graves back in April). I started Tannen at the same time as Graves, but then he fell by the wayside as I finished off a few other bits and pieces. I struggled with bits of the mini as it is designed in a hunched over pose which is nice, but awkward at the same time. Not the hardest or most intricate of models, but for me for some reason not the easiest. Still, I do think the Malifaux plastics are nice kits and cannot fault the first two I have tackled.

I still know very little about the various characters in the game (I keep meaning to pick up the rule-books other than the small Rules Manual I have), but I know the two i have painted so far can work together, and I feel that visually Tannen and Graves fit neatly with one another. 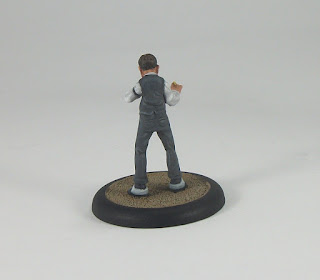 I don't know if I will ever play Malifaux, but if I do, I need to get a few more models painted to say the least. Not sure when that will be however...

On the painting horizon next I think will be some G.I. Joe minis, some Pulp City, and maybe finishing some BMG odds and ends. And on top of those, I do really need to make a start on my Dropzone Commander force.Hopefully I will recover some momentum sooner than later, so watch this space.
Posted by pulpcitizen at 13:31