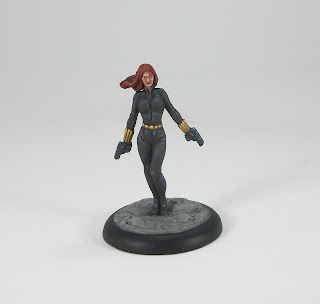 Black Widow was another quick paint job after recently completing Groot, but in my more usual approach. I started this one, like Groot, as a way of getting a 'quick win' of getting something done after June's slowdown, and was surprised just how swiftly (for me, anyway) I was able to get the main work done. I found it a very nice model to paint, probably because of the quick turnaround as well as the subject matter. That said, I do need to soften the shading around the face so it doesn't look so heavy, which I only spotted after taking the picture!

The mini was an earlier Knight Models Marvel release and has been superseded by a different pose sculpt, both with same costume and trappings. Not sure whether she can be used in official Knight tournaments based on their proxy restrictions in BMG, but time will tell! 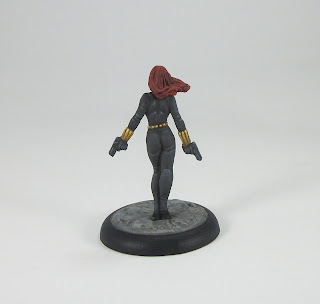 After painting so many (not-quite-black) black costumes lately, this was really straightforward, especially as she has four main colours. I opted for painting her hands as gloved rather than bare, since it just seems more logical she should have them. While tackling Widow, I have made a small start on her team-mate Black Panther who I hope is another quick win. After that, I don't plan to tackle another MUMG mini for a while as I want to get into some backlogs for Pulp City, GI Joe and BMG, and finally start some Dropzone Commander painting.
Posted by pulpcitizen at 12:46