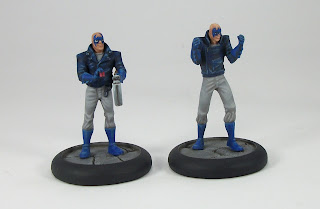 Commenced alongside Son of Batman 01, I held back finishing these two minis until I had a clear colour scheme from tackling the first one. My main drivers for painting them were wanting to (hopefully!) do a Batman crew without Cops, and also to get some 'quick wins' in the painting queue in July both of which the three Sons of Batman satisfied.

Some former members of the Mutants gang in The Dark Knight Returns became vigilantes inspired by the return to the public eye of an older Batman. In terms of style, these are very close to what was depicted in the original comic book. 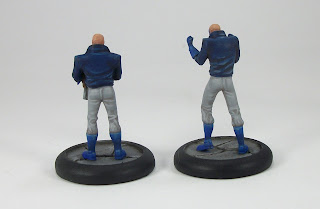 In terms of game play I have yet to use a Batman crew, but I think Son of Batman 02 (with the Shotgun) will be a fairly close substitute for Agent Ron, in Reputation and Funding costs. Son of Batman 03 on the other hand, is a trickier decision. In effect at 39 Reputation he is roughly equivalent to two Cops, meaning one less model in a hypothetical crew. At Defense 4 and Endurance 6 with Hardened and counterattack he seems very much set up for tanking an Objective, which makes his Follow Me Trait somewhat redundant. As a consequence I have my doubts about using Son of Batman 03 despite his very good aspects.

Not sure what I will paint for BMG next, or when I will next paint something from the range as this month I have managed to paint stuff for three other ranges which has been nice. That probably means I will end up being BMG-centric next month without realising it! More importantly, this takes me to 10 painted minis for the month overall, which is pleasing and gets me back on course for my annual target. In addition, these are the 48th and 49th BMG minis for, so the next one will be something of a milestone.