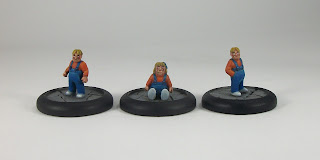 Grr - sometimes I hate painting stuff, I really do. I paint to play (I don't like the sight of bare minis in games, so painting is very much a necessary evil for me), and sometimes I find it really arduous. That was the case with these Robotic Dolls. Unfortunately the detailing was soft, and did not replicate the level of detail depth visible on the Knight Models studio versions (which were presumably resin casts; as an example, folds are visible on the studio minis which were not apparent on these metal casts). Well, regardless, they are now done; they could be better, but I am moving on from them - they will pass muster and are good enough for the table. 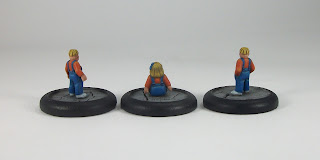 The Robotic Dolls are creations working for the Joker in the Dark Knight Returns story-line (the same one which included the Sons of Batman), and I think the minis are pretty faithful representations, although I would have preferred crisper casts from the masters. In game terms they are pretty much one-shot flying bombs, because with Defense 2 and End 3 or 4 they won't last long if attacked. Until I give them a go on the table I am not sure how useful they are since they are unlike any other characters available right now in terms of rules. Although they have Laughing Gas attacks, using them precludes their self-detonation in the same Activation, giving your opponent opportunities to take out a Robotic Doll unless you feel confident of Activating it late in a round, then winning the Take the Lead draw to go first in the following Activation. Bobbie Mk II (far right, hands in pockets) seems the most effective of the three, and both his Attacks will affect a cluster of enemy models.

Finishing these takes me to seven Joker Henchmen, at over 165 Reputation, so I really should paint a Joker soon to consider actually playing them! In addition, I have moved past the milestone of 50 painted BMG minis with these three, so I *may* do a big 'everything so far' group shot soon to celebrate.